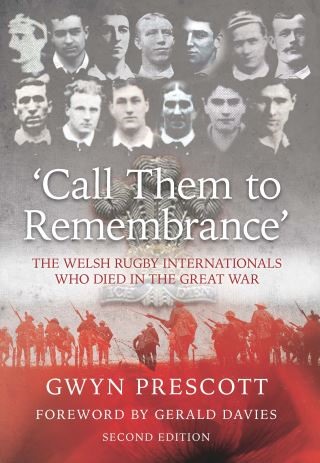 Call Them to Remembrance

The Welsh Rugby Internationals Who Died in the Great War

It is estimated that the First World War claimed the lives of 40,000 Welshmen, all of them heroes whose sacrifice is honoured by a grateful nation. ‘Call them to remembrance’, which includes 120 illustrations and maps, tells the stories of thirteen Welsh heroes who shared the common bond of having worn the famous red jersey of the Welsh international rugby team. Gwyn Prescott’s sensitive and fascinating book, the product of over ten year’s research and study, recovers the memory of these thirteen multi-talented and courageous Welshmen who gave their lives in the Great War of 1914-18, detailing their playing and military careers. Amongst their stories are the leading amateur golfer in Wales who represented Newport at five sports; the Cambridge choral scholar who gave up his job in India to volunteer for the Army; the flying Cardiff winger who impressed Lloyd George; and the ‘lion-hearted’ hero of the famous Welsh victory over New Zealand in 1905.

Gwyn Prescott: A native of Cardiff who played alongside Gareth Edwards in the 1965 Welsh Secondary Schools team and later played for Cambridge University, Gwyn Prescott was awarded an MPhil, on the history of rugby, by the University of Glamorgan and is author of several books including ‘This rugby spellbound people’ - The Birth of Rugby in Cardiff and Wales (St David’s Press, 2015).