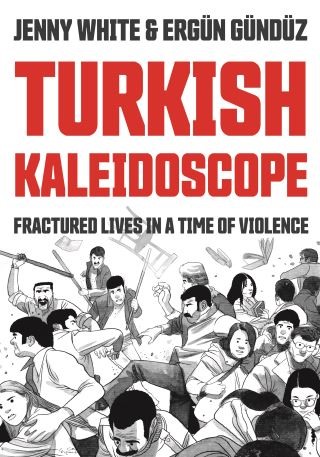 Fractured Lives in a Time of Violence

Turkish Kaleidoscope tells the stories of four unforgettable protagonists as they navigate a society torn apart by violent political factions. It is 1975 and Turkey is on the verge of civil war. Faruk and Orhan are from conservative shopkeeping families in eastern Anatolia that share a sense of new possibilities. Nuray is the daughter of villagers who have migrated to the provincial city where Yunus, the son of an imprisoned teacher, was raised in genteel poverty. While attending medical school in Ankara, Faruk draws a reluctant Orhan into a right-wing nationalist group while Nuray and Yunus join the left. Against a backdrop of escalating violence, the four students fall in love, have their hearts broken, get married, raise families, and struggle to get on with their lives. But the consequences of their decisions will follow them through their lives as their children begin the story anew, skewed through the kaleidoscope of historical events.

Inspired by Jenny White's own experiences as a student in Turkey during this tumultuous period as well as original oral histories of Turks who lived through it, Turkish Kaleidoscope reveals how violent factionalism has its own emotional and cultural logic that defies ideological explanations.

Jenny White: Jenny White is a social anthropologist and professor at the Stockholm University Institute for Turkish Studies. Her many books include Muslim Nationalism and the New Turks (Princeton) and the novel The Winter Thief. She lives in Stockholm. Twitter @WhiteJennyB Ergün Gündüz is a critically acclaimed artist and the author of numerous books and albums. His work spans graphic novels, comics, caricatures, animated films, book covers, and commercial art. He lives in Istanbul.